On Saturday, Nov. 8, the men’s basketball team played an exhibition match against the Manhattan College Jaspers. Last season, the Jaspers played in the Division I March Madness Tournament and suffered a loss at the hands of the Louisville Cardinals. The Jaspers willed their way to a hard-fought 78-67 win in Riverdale, N.Y. 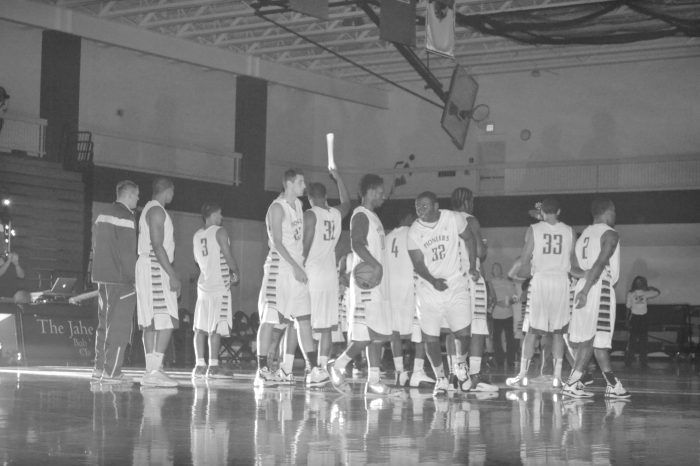 The Pioneers battled valiantly through most of the first half, but saw a surge by the Jaspers over a four and half minute span. The Jaspers ripped off a 13-1 run, pushing their lead from two to 14. The Pioneers did not give up, though, as they were able to slowly trim the lead and get it down into single digits in the winding minutes of the first half. With Manhattan up 33-31 and just under four minutes left in the half, the Jaspers regrouped and closed the half strong with a 9-1 run.

As the second half got underway, junior forward Ashton Pankey went to work and hit a pair of layups. Pankey scored eight of the first 13 Jasper points in the second half and capped it off with a thunderous dunk. The dunk sparked a 10-0 run for the Jaspers as they extended their lead to 63-45 with just over 11 minutes remaining.

However the Pioneers showed perseverance, battling back and cutting the deficit to single digits multiple times, but in the end, the Jaspers were too much to handle. Senior Manhattan forward Emmy Andujar and Pankey each finished one rebound shy of a double-double. Senior Pioneer forward Tyuan Williams led all scorers on the afternoon with 20 points, while senior forward Charles McCann grabbed a game- high nine boards and added six points. It was a tale of two halves for the Pioneers as they made some strides in the second half, improving their percentages from the field and from down town.

The Pioneers will kick-start their season on Saturday, Nov. 15, when they face off against American International College at the Pratt Recreation Center in Brookville, N.Y. The tipoff tournament is scheduled for 2.30 p.m.