“A to Z” Series Premiere

“A to Z” is a new romantic-comedy television show on Thursday nights at 9:30 on NBC, created by Ben Queen (writer of “Cars 2” and Fox’s “Drive”). The show follows the relationship between Zelda Vasco (Cristin Milioti) a no-nonsense lawyer, and Andrew Lofland (Ben Feldman) an employee of an Internet-dating site who longs to meet the girl of his dreams. 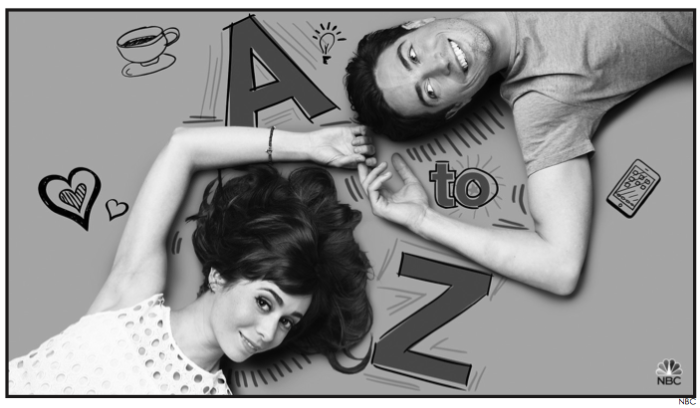 Immediately, the pilot tells the audience that this is just a stepping-stone in Andrew and Zelda’s lives, with Katey Sagal – the narrator – stating that the story lasts a little over eight months. However, this takes nothing away from the story or the characters. Both Andrew and Zelda are great onscreen presences, and their chemistry is quite charming, with all the quirky and oddly-romantic power reminiscent of Alvy Singer and Annie Hall in the Woody Allen classic, “Annie Hall.”

Queen’s pilot script might bring him into a new light, as he has never really touched upon a romantic-comedy like this. Pilots are usually unfunny and tiring, but this episode is loving, fun, and enjoyable due to the charm of Milioti and Feldman. Following “Drive” and “Cars 2,” Queen is building his way up creatively, pushing out, quite possibly, his best work to date.

Feldman and Milioti portray the perfect couple, which the audience is able to relate to. They’re awkward, fun, and cute.

The contrast between Zelda’s hardworking essence and Andrew’s goofy allure creates a perfect on-screen balance. Milioti is especially a standout performance. The actress proved her incredible television presence in the 200th episode of “How I Met Your Mother,” and we see that strength here, as well. Her performance as the titular mother in the show made the audience fall in love with a character who wasn’t on screen for almost the whole series. The pilot of “A to Z” demonstrates that Milioti has much more to give as an actress, and that “How I Met Your Mother” wasn’t her acting peak. Quite frankly, she’s brilliant.

Of course, it’s only the pilot, so it is hard to say exactly where this show will go, but it seems like it will be excellent. The cliché rom-com cinematography (i.e. spinning during the kiss) is forgiven, as it tremendously benefits the show’s humor – this show is about the relationship of this couple from “A to Z,” there will be clichés everywhere.

“A to Z” seems to be the modern answer to “Annie Hall,” or more of a romantic twist to Richard Ayoade’s film, “Submarine.” Queen creates relationships that are relatable, and develops a romantic comedy that may not have the happiest of endings. This is a must-watch, and I do not say this lightly.